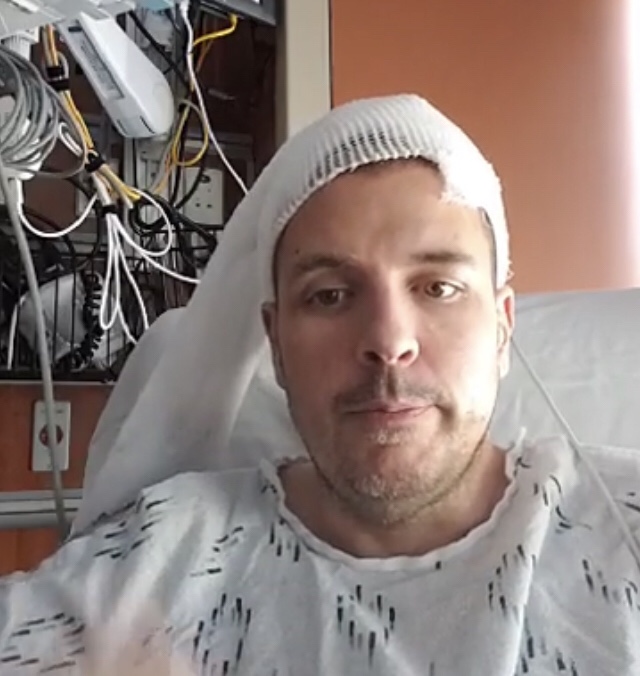 Five days out of surgery and into Limbo. For the past three days Ryan has had off and on profuse sweating thought to be withdrawals from his medications. Now Ryan and I question whether the sweating is really caused by withdrawals.

Ryan has had constant hook up to an EEG from the probes in his brain. The EEG is monitored by people trained to detect a seizure at any time. If Ryan notices anything odd or has a myoclonic jerk, he pushes a button to tell the people monitoring him. The monitors also have a camera on Ryan to follow his every move, which further helps them to give information about any seizures or incidents.

Nothing has indicated and no one has discussed whether Ryan should push the button when his sweating episodes start. The neurologist put Ryan back on a low dose of one medication once a day in effort to stop what was thought to be withdrawal sweating. When that only helped a little bit, the neurologist upped the lower dose to twice a day. After tomorrow’s dose, the doctor intends to start tapering the medication again. Yet Ryan continues to have episodes of profuse sweating.

As Ryan and I texted each other after visiting hours tonight, I speculated as to whether his body is trying to reject the foreign probes in Ryan’s brain. Almost like a body would reject a transplant or implant.

Then I decided to search the internet (with the knowing that it is not always reliable). I was surprised to find multiple publishing’s of a 2019 article about a man who had episodes of profuse unexplained sweating episodes for three years when the doctors finally diagnosed him as having temporal lobe seizures. The article went on to say that sweating can be an aura, or sign, that a seizure is on its way.

Sweating has never been an aura or sign of a seizure for Ryan. In fact when he and I first started dating I would get concerned because he would do activities that should cause sweating but didn’t. He seemed to have more myoclonic jerks when he didn’t sweat.

Now Ryan has probes in his brain that were placed in areas of his brain that could trigger a seizure. No one said the seizures triggered would present as they had in the past or that Ryan might start having auras he never had before.

Is this profuse sweating really withdrawals? Or maybe Ryan should start pushing the button to let the monitors mark when it starts and see if there is any change in the EEG readings. Limbo day six will bring new discussion with the neurologist.